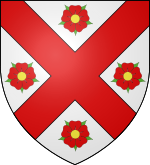 Welcome to summer! I just returned from the Texas Scottish Games held in Decatur, Texas. Sandy McFarland Morgan and Marie Robb hosted the tent, nicely decorated with the beautiful historical panels and drop-down posters about the Septs and clan map. It was great to visit with everyone since I couldn’t make it to our AMM in Woodlands.

Which brings me to a big surprise…one of my McFarland cousins did go to the Woodland games, met our clan, and started talking to Sandy about where his McFarland relatives lived. He mentioned Fannin County, Texas; so Sandy immediately said you must be related to Mary Helen. So, please welcome Pat Rattan to CMW, my third cousin, twice removed, who is a double McFarland.

I would like to honor Pat’s dad, Billy Joe McFarland, in this article. Billy was born in 1923 in Ladonia, Texas…the same town as my grandmother Lola McFarland. The Rattan family emigrated from North Carolina in the late 1700s, to Illinois by 1830, and Texas by 1837, where they were neighbors to the McFarlands during the Texas Republic.  Our common ancestor is Andrew Jackson McFarland, born 1817 in Missouri, who came with his father James E. McFarland to Fannin County, Texas in 1837, and married Artimissa Pence (yes, distantly related to the VP) in 1846. They had four sons, one was my great-grandfather James Franklin (b. 1847), and another was Billy’s great-grandfather John Ewing (b. 1849). John Ewing married his second cousin Nancy Bayless Horn (whose grandmother was Anna McFarland (sister to James E. above), which is how Billy came to be a double McFarland.