What is a Highland Game?  I am often asked this question.  I quickly say:  “You know, men in kilts throwing heavy objects.”  That usually answers the question.  EVERYBODY knows what a kilt is.

I’ve seen the movie, Braveheart.  I know about the TV series, Outlander.  So I have that same vision in my mind of men in kilts.  My husband owns 3 kilts that were made specifically for him.  Both my children, as well as my son-in-law (a McCoy), own kilts.

I thought I would do a short blog about the great kilt.  I started with Wiki, but I usually like to head to the references to make sure some 6-year-old is not making additions to the wiki.  In the discussion about the great kilt, I was taken to the Scottish Tartan Museum. http://scottishtartansmuseum.org  But the article about the History of the Kilt was not as much fun as I thought it would be.  So of course, I need to share! 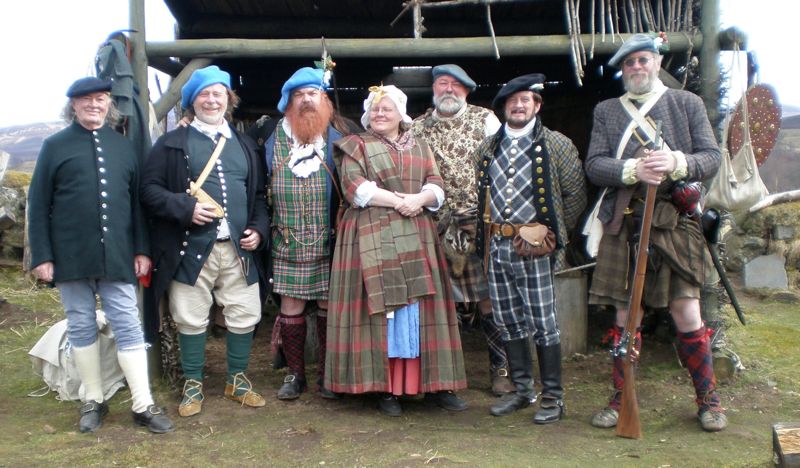 Pictured Above:  The MacFarlanes Company (note the variety in kilts)
http://www.macfarlanescompany.org/Where/NTS/Pages/3.html

First, it appears that the Irish claim the kilt as their own.  They also claim whisky, tartan and anything else you would imagine to be of Scottish origin.  Well, I’m ok with that.  I have some Irish Bailey's in my family tree.

But you quickly start to learn that the origin of the kilt is not really blended into the “made for TV” version of the history of everything Scottish.  That’s a bit of a blow, isn’t it?  Per Matthew Newsome, in his 2003 article:

First:  The issue of the Irish.

Nope.  What is referenced to be the introduction of the kilt in Ireland,  is interpreted to be the leine (that white/off-white underdress).  Short or long, it is not a kilt.  (So sayeth the author.)

Second:  The issue of Pre-Medieval Kilt in Scotland

Nope.  Prior to the 16th century, what might have been deemed a kilt, was actually, again, the leine, or tunic.

BUT… starting in the 16th century you hear mention of the feilidh-mòr or great wrap, and the abreacan-feile or tartan wrap/belted plaid.  A plaid is defined by the author as a “heavy woolen fabric worn over the body like a mantle or a shawl.”  And no… "plaid" is an Americanized word synonymous with tartan.  The belted plaid is a very long plaid gathered and belted at the waist.  The modern reenactors call it the “Great kilt.”  Well, that’s what I’ve always called it too.

Not until 1578 is there a true reference to the belted plaid from Bishop Lesley, of Rome.  “Their clothing was made for use (being chiefly suited for war) and not for ornament.  All, both nobles and common people, wore   mantles of one sort (except that the nobles preferred those of several colours).  These were long and flowing, but capable of being   neatly gathered up at pleasure into folds.”

George Buchanan writes in 1581:  “Their ancestors wore plaids of many colours, and numbers still retain this custom but the majority now in their dress prefer a dark brown, imitating nearly the leaves of the heather, that when lying upon the heath in the day, they may not be discovered by the appearance of their clothes; in these wrapped rather than covered, they brave the severest storms in the open air, and sometimes lay themselves down to sleep even in the midst of snow.”

But, the author tells us that the first real definitive description comes out of Ireland.  (Here we go again…). Fortunately,  Life of Red Hugh O’Donnell written by Lughaidh O’Clery, discusses a group of hired mercenaries from Scottish Hebrides who were employed by O’Donnell in 1594.  Aha!  So it IS Scottish!

The issue of “The Whole Nine Yards.”

I’ve heard that saying too.  “The whole nine yards.”  I had a merchant at one of the Games we attend tell me that this is in reference to the kilt.  When my son-in-law was measured for a kilt, the merchant said that because his is such a big guy, (Dude played football and can lift an entire couch by himself) he would take the whole nine yards.  And then he launched into his historical rendition of the saying.  Actually, this is what those of us in the historical/archival business call “Shanghai History.”  For it is a fact that has now been morphed into something it really isn’t. The fact has been shanghaied for the purpose of a wonderful story.  You know… “It took the whole 9 yards.”

So, how many yards?  Length at 4 or 5 yards.  Plaids had to be about 9 yards, but often 10 to 16 yards in length.  The width of the cloth was only 25” wide.  That would require more length to the cloth to meet the goal.  And the author tells us that often two strips of 25” cloth (the actual width – much smaller in width than today’s cloth) would be sewn together in order to cover the subject.  9 yards of fabric would actually make 4 or 5 yards in total.

The issue of How to wear the kilt

Well, as I usually say, we don’t care what you wear, just show up!  It appears there are no real records to prove how the kilt was worn.  There are pictures, but usually the young man grew up learning how to wear the kilt, just like his father learned, and his grandfather did.  Like tying your shoes.  There are actually a couple of different ways to tie your shoes, but how do YOU tie your shoes?

“Begin by laying your material out on the ground.  To start, you may find it easier to lay it all out neatly, but once you get used to doing this, you will not need as much room-you will only need to spread out the section you are currently pleating.  Gather the center part of the plaid into folds or pleats.  This does not need to be neat, precise pleating as in a modern tailored kilt.  Think of it more as being roughly gathered and you will have more authentic looking kilt.  The end goal is to reduce the 4 or 5 yards of material to a length about 1.5 times your waist measurement.  You should aim to have a section of gathers or folds approximately the length of half your waist size in the center, with unfolded sections of equal length on either end.  Since these folds are not sewn in, they can always be readjusted later.  Precision is not something needed when folding your plaid."

"Lie down on your plaid.   I will frequently have people tell me at this point that it just seems silly to suggest that the Highlanders would have lain down to get dressed.  But keep in mind that these plaids were also used as sleeping blankets and the wearer would have more than likely been laying in his plaid already.  You will need to lay down on your plaid, body parallel to the pleats, so that the lower edge hangs about your knees.  Whether it is above, below, or on your knees is personal choice.  There does not appear to have been a standard length as this woodcut of Scottish soldiers from 1641 clearly shows.”

“Wrap the two unpleated ends around you.  It is suggested that you overlap them left over right.  There is no historical basis for this but it is the way modern kilts have always overlapped.  You will need to take a sturdy leather belt and run it around your waist at this point and fasten it well.  If you have anything hanging from your belt such as a dirk (knife) or sporran (pouch), make sure it is on your belt before you do this.  Every description I have read of how to put on the belted plaid starts off with having the wearer lay out his belt first upon the ground and then pleating his material out on top of the belt.  I do not know why people suggest this.  It is more difficult this way and is pure foolishness.Once you have the belt fastened, stand up.  You are now wearing the belted plaid.  You will notice a large amount of material overlapping your belt and hanging down around your legs.  This material can be arranged around your upper body in any number of ways, depending on the climate and activity level of the wearer.  The illustration above shows some good examples.  It is suggested that the front two corners be pulled around behind your back and tucked in to the belt at the base of the spine.  This will create pockets and allow easy access to your sporran.  The remainder behind you can be pulled up over your head or shoulders in the cold or rain, or left trailing behind in heat.  It can be pulled up and tucked into your belt, forming a large bag for carrying.  Most often part of it is drawn from the back onto the left shoulder and part drawn up under the left arm across the front and pinned together.  This will create a large bag under the left arm, and is quite striking in appearance.   The functions of this garment are many and varied!  But remember when wearing it that the primary concerns are that you are comfortable and covered.  Other than that, feel free to experiment with different ways of arranging it and find one that works well with you.”

So, no; my bubble is not burst.  But at least now I know that the kilt is not as old as I thought it was.  As for the actual tartan…. The earliest tartan, the Falkirk Tartan, is estimated to be from 325 AD.