Of Clan Chiefs, Chieftains, Coat of Arms, and the Diaspora – a Redo with commentary from Dr. Bruce Durie and Chevalier Terrance Gach MacFarlane.

(Or as I would identify this as a “corrected copy")

I originally posted this a few days ago.  It was initially received well, except for a couple of comments from those who we would expect to take umbrage with the information.  They have since left our Clan MacFarlane Worldwide facebook page.  But, because of the discourse that my blog stirred, our Clan MacFarlane Worldwide President, Laurie McFarland Jackson, thought it best to reach out to the experts for comment and clarification.  We have Dr. Durie’s permission to publish his comments, that will be added, where appropriate, and without edits.  Additionally, Terrance is our MacFarlane heritage expert (Along with Mary Helen Haines and Andrew MacFarlane), so I will also include the correct information about the lineage of the MacFarlane Clan Chief.  Edits and additional comments will be noted with **. 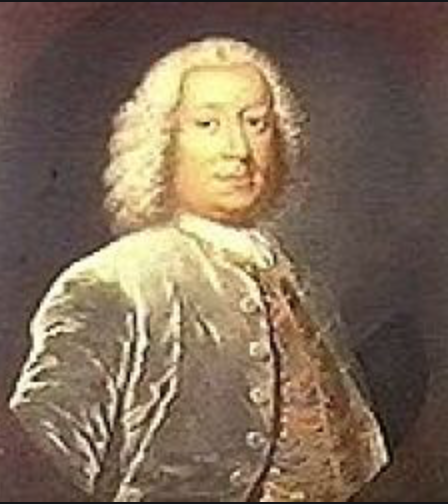 Well, I must admit that I learn something new about the Scots just about every day.  Recently, it was noted that someone had blogged that their husband was the “… current President and Chieftain of our clan…” which prompted some quick research to ensure that I hadn’t missed anything in the world of all things Clan MacFarlane.  I was also about to write a short blog about Clan MacFarlane’s status as an armigerous clan, to mean we have no chief, etc.  However, I have learned that this term is incorrect and created but a short 20 years ago by a couple of authors.  Odd.  Isn’t there a Council of Armigerous Clans?  Yes.  How does this stuff happen?

**To begin with, we heard from the young lady that she had been misquoted.  Indeed, she told us:

“I never said he was THE Chieftain.  I said he was A Cheiftain [sic]. Which he is under our charter and heraldry obtained from the Lord Lyon court of which CMW NO LONGER is part of. ICMS is the only true, legal Clan MacFarlane Society in the world today.  And THAT is a fact.“… **

So, let me share some information that I have just recently been taught, and I’ll also include my own thoughts.  My information comes by way of Dr. Bruce Durie, noted scholar, author, geneaologist, and much more.  In fact, here are his credentials:  BSc (Hons) PhD OMLJ FCollT FIGRS FHEA QG Genealogist, Author, Broadcaster, Lecturer Shennachie to the Chief of Durie Right of Audience at the Court of the Lord Lyon Academician, Académie internationale de généalogie.  To say that he is my “go to” for definitive information on heraldry and all things dealing with Clan Chiefs, etc., is certainly a gross understatement.

**  Per Dr. Durie upon reading the blog:

I read the Blog.

Apart from some minor spelling and other solecisms (Lyon Court rather than “Lord Lyon Court”, armigerous rather than “armigorous”, in the Noblesse of Scotland not “Noblest”) it makes the case well.

Well, there is a routine for that stuff (a Family Convention) and it has to be shown that there were extensive efforts to contact every MacDribble everywhere, whether they joined any particular club or society, or didn’t.

I have recently helped both MacAlpine and Currie to get a Commander, who after a period of maybe 5 to 10 years, may become Chief, or find another contender. (It took Buchanan 350 years, but they recently managed it!)

Those who try to “pack the deck” with their own Society members or whatever, get short shrift and are sent back down the snake to square one, where they have to start again and do it properly this time." **

First – Does Clan MacFarlane have a Chief?  No – nope.  Our last Clan Chief was Walter.  He was the 20thClan Chief.  He passed away in 1767, and since that time there has been speculation as well as research on the line.  But no, we do not currently have a Clan Chief.

** - Per Chevalier Terrance Gach MacFarlane:  Our last Clan Chief was William.  It appears there were errors made by historians (James MacFarlane) that created an incorrect lineage.  Terrance has provided the correct line.  While I use the image of Walter MacFarlane (above - at least I BELIEVE this is a rendering of Walter), he was our 16th Chief.  William was his twice-great grandnephew, the last Chief and the 20th Chief. (Born 1813, Died 1866). **

So to the young woman proudly professing her husband to be the current President and Chieftain… I know that In my home state of Kansas, we can call ourselves anything we like (such as Minnie Mouse), but in the world of Scottish heraldry, this is taken quite seriously.

** Per Dr. Durie:  “Without wishing to fall out with anyone, I’d be interested to see what proofs _____ has that _____ is “A Cheiftain.  which he is under our charter and heraldry obtained from the Lord Lyon court”.

Charter – sure, if that’s what your Society Charter says, but people back in Scotland look askance at the assumption of such titles.

I could start calling myself “King of All the Bohemias”, but it wouldn’t mean much, and I doubt it would get me invited to tea at Holyrood Palace.

Third – Are there official Clan MacFarlane Coat of Arms?  Yes and No.  Directing you to Dr. Durie’s website on acquiring  an official and legal Coat of Arms, please see this link:  http://www.brucedurie.co.uk/downloads/Heraldry-booklet.pdf

Also, how to acquire a corporate Coat of Arms information from the Society of Scottish Armigers:  http://www.scotarmigers.net/info-leaflet-4.htm

In 1997, Clan MacFarlane Society, Incorporated, received their corporate Coat of Arms.  The Certificate presented to Clan MacFarlane Society states “Know Ye Therefore the we have devised and Do By These Presents Assign, Ratify and confirm unto the Petitioners Clan MacFarlane Society, Incorporated the following Ensigns, Armorial as depicted upon the margin hereof, and matriculated of even date with These Presents upon the 22nd page of the 81st Volume of our Public Register of All Arms and bearings in Scotland, videlicet: -- Argent…. The said Society is, amongst all Nobles and in all Places of Honour, to be taken, numbered, and received as a Society Noble in the Noblest of Scotland…”

This is a copy of the Certificate available from a simple web search: 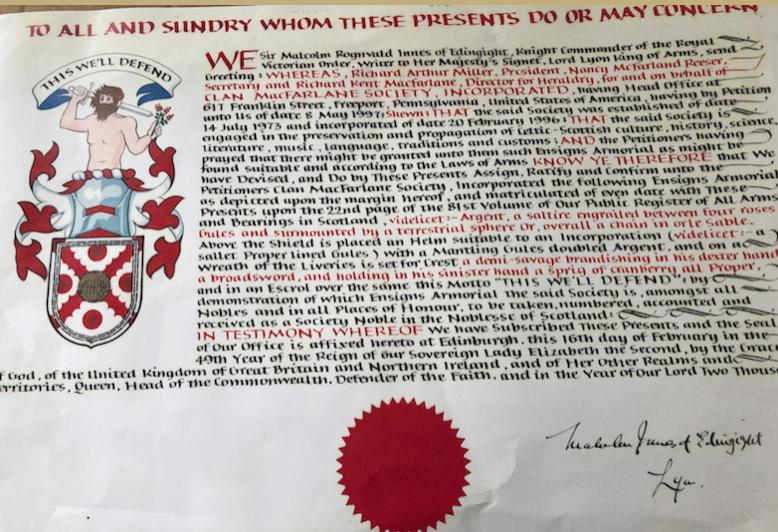 And as an aside, I am trained as an attorney in the United States.  I was fortunate to work for Westlaw, a division of Thomson Reuters.  I taught legal research to law students, faculty, staff and judges.  That also provided me access to the laws of other countries.  I did have access to court records from the Lord Lyon.  I found it was interesting that as the Lord Lyon could “giveth” the Lord Lyon could also “taketh away.”  Bad behavior could be reason for the Lord Lyon to rescind a Coat of Arms.  Food for thought.  Right?

So yes, the Clan MacFarlane can have a Coat of Arms, but it is a beautiful item that should be displayed quite visibly for all to see.  However, it is not the “golden ticket” that some might have you think.

**  Per Dr. Durie – “ Of course an organisation may petition to have a Coat of Arms from the Lord Lyon. The Trump Organisation in Scotland has Arms. I (or anyone else) could start a “Clan MacFarlane Club” tomorrow, and petition for Arms for the club. What is to stop me?

But the possession of Arms by some Surname Society confers no authority over anyone of that surname.

The other thing is use of Arms. If a Society has been granted Arms, well and good. If not, there is NO JUSTIFICATION for using “ancient Arms” or “previous Chief’s Arms” or any such thing.

Arms always belong to one person (or body) at a time, and cannot be assumed by anyone else.

If someone does become Chief of Name and Arms, those “Ancient Arms” will presumably be granted to that person.

Until then, no none is justified in reproducing them anywhere without a disclaimer such as “The Ancient Arms of the Chief of Name and Arms of MacSweatie, currently not held by anyone”." **

I understand that some might refer to the Diaspora as something that connote only harsh times for the Scots. Connected with the history of the clearances of Scotland in the mid to late 18th century and forward in time, the word Diaspora can bring a sad feeling.  Many families were torn apart and sent to the 4 corners of the world.  For Scotland, that might be Ireland, Australia, the Colonies, and Canada.  And indeed, it was harsh.  https://www.britannica.com/event/Highland-Clearances  But I prefer to look at the Diaspora as spreading of the wealth of the Scottish culture.  Many of the founding fathers for the United States were Scotsmen.

Today, we welcome MacFarlanes who have reached out to CMW via facebook,  from all corners of the globe.  So I like the richness of the culture as it has spread to others and been shared across the globe.  I have friends in South America, New Zealand, Japan, Spain as well as Scotland, Canada and more.

And the term Diaspora is not a term for just Scotland.  Do a search online, and the Diaspora is used to discuss any culture that has been cast far and wide:  https://en.wikipedia.org/wiki/Diaspora

I chose the name “Diaspora” for our blog simply because I liked the idea that the Scottish culture had indeed been spread around the globe.  And my hope is that as we continue to explore our culture, we can see the continued impact the Scots have had even in the far reaches of our world.

And with that…. We have answered all our questions:

No Clan Chief, No Clan Chieftain, We are not really armigerous, we just don’t have a Clan Chief.  We can obtain a Coat of Arms, and that is an ongoing discussion for Clan MacFarlane Worldwide, and perhaps the Society in Australia.  And finally, we are all part of the Diaspora with our feet across the globe and our hearts in Scotland.